GRAMMAR OF AN EXILE 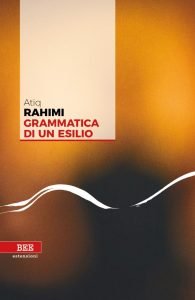 By writing his memories and reflections, and sometimes, instead of using words, using letters and drawings, Atiq Rahimi has created an intimate and poetic story, a sort of meditation on what remains of our life after losing the land of our childhood and facing exile. Rather than a biography, this work, which will be published in Italy to coincide with the Dedica festival, is a sort of wandering narration which weaves together a variety of sentiments, words and writings.